So encore’s Hot List 2010 comes out on Wednesday! Be sure to check out what the buzz about Wilmington, NC, is, and learn about some really cool people, places and things. A few locals have embarked upon their own war against the Gulf spill, saving the animals and the environment. 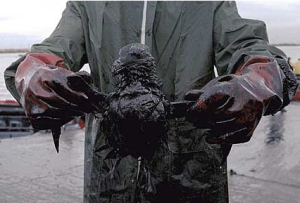 Over two months into the Gulf Coast oil spill, images of pelicans drenched in black tar, sea turtles swimming in the thickest gunk imaginable, and fish floating in pools of death unfortunately have become de rigueur. Frighteningly so, it doesn’t get easier to see. Most Wilmingtonians can sympathize with the people and environmental issues directly affected by the crisis. Simply entertaining the thought of having our East Coast and Atlantic Ocean tainted by crude oil, poisoning our water, the aquatic life and not to mention our heavy tourist-based economy, is nothing short of devastating. Hopefully, it gives us all a new outlook on whether we should support off-shore drilling.

Two local companies have taken action to help alleviate the life-threatening outcome the oil has had on the animals living in the Gulf, and they’re doing so with green science as their weaponry. ShellBond and Glynne’s Soaps both have a common goal: Save the animals and the environment.

ShellBond works tirelessly to develop technology for the environment, and over the past five years they’ve been defining and researching products that will work to clean air and water safely. As of late, they have been working toward “Federal Funding for Habitat Restoration, as ShellBond has shown remarkable properties to restore oyster and fish habitats, more effectively than traditional methods,” according to Dr. John Hayes, scientist of ShellBond. “This could put NC and Wilmington at the center of new fisheries for the future.”

ShellBond basically exists as a product of “unique calcium hydrate polymorph (or crystal) that has demonstrated exceptional ‘super sponge-like’ bonding qualities with a natural PH,” according to their Web site, www.ShellBond.com. Hayes says, “Upon watching the BP oil spill footage, and the devastation it was doing to the marine and bird wildlife, we knew we had to take action, accelerate our research and produce a soap without surfactants.”

Surfacants often prove toxic, yet remain an ingredient in household items like toothpaste (which can add to the swelling of gums) and cleansing detergents (which have proven to wash the protective coating from a frog’s skin). “We knew that the Dawn products contained surfactants, and we wanted to do better,” Dr. Hayes comments. “The birds have already been exposed to hydrocarbons, we wanted a natural and organic soap that would clean them and allow them a second chance at survival.”

Hayes contacted Gayle Tabor and Jen Beddoe, owners and operators of Glynne’s Soaps (http://glynnesoaps.com), after discovering they were local and had an unwaivering faith toward producing all-natural products. Because the soap company focuses on making skin essentials and cleansing products from the most pure, raw ingredients, Tabor says the partnership seemed an organic fit.

“Our company began when our dog, Franklyn, was killed due to the use of topical flea treatment,” Tabor notes. “As a company, we have always been passionate [against] the use of pesticides or harmful chemicals on dogs. So, it was easy for us to make the transition to being passionate about the plight of the birds as a result of the BP oil spill.”

The three set out to work on a formula to clean the animals, the oil off of the tools, and help absolve the grit and tar from the hands of the workers. Essentially produced from oyster shells, SeaSoap was devised. The next step in their process consists of getting message to the masses in order to find funding and connections with the right people to see the product through full use.

“John has many ongoing connections with Texas A&M University, NYU and UNCW,” Tabor says. “We are diligently pursuing all avenues as we endeavor to get this product to the Gulf.”

Self-proclaimed as a persistent salesman for SeaSoap and ShellBond’s dedication to oil remediation, Hayes has contacted the Associated Press and Wall Street Journal, which have constantly been reporting on the ghastly Gulf Spill. Yet, not one reporter, editor or publisher has responded. Still, his hope doesn’t wane.

“I will not give up and will speak to anyone as this disaster in the Gulf continues,” he says. Perhaps most impressive comes from his forethought in looking after our own coast and any possible endangerment it faces. “What is NC doing to prepare if the Loop Current does bring oil to our pristine shores?” he asks. “Is NC prepared to treat our pelicans with surfactants or organic ingredients? Don’t they deserve the best?”

New Business Feature! »
« The Largest Eggplant on the Face of the Earth!

Welcome to my blog! I'm Shea, and that's my little wolf monster, Shadow. We hope you'll subscribe and interact with us on food, gardening, music, travel and, well, anything, really.

Stuff of the Past